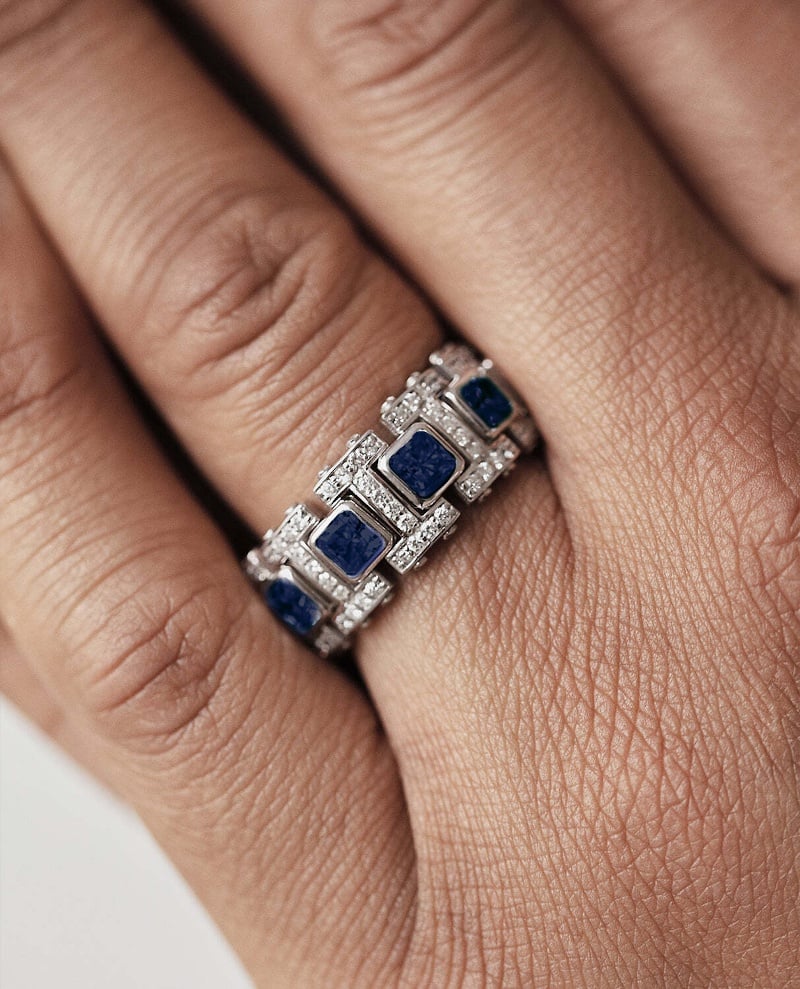 The only gemstone guide you’ll ever need.

Majestic and mystical, precious stones have mesmerized humans for centuries. From the unearthing of the first diamond in India in the 4th century BC, everyone’s been clamoring to get their hands on some… or get some on their hands.

Here at Rockford Collection, we’re not immune to the allure of a glittering gemstone. We never settle for second-best, and when a love of bling puts us in the company of the exotic Shahs of Iran, incredibly wealthy Maharajas of India, the elegant British Royal Family and the glamorous Grimaldis of Monaco… well... we know we’re in the right place.

Adding precious stones to jewelry just makes sense. It increases the value of a piece exponentially and transforms it from everyday to exceptional.

If the glitz and glamour doesn’t quite make sense to you or needs a bit of decoding, read on for a crash course.

In the next 3 minutes, we’ll whisk you from South Africa to Colombia and back in time to ancient Greece, we’ll do a quick check-in with our pals at Tiffany and Cartier, and there’s a quick science lesson too. 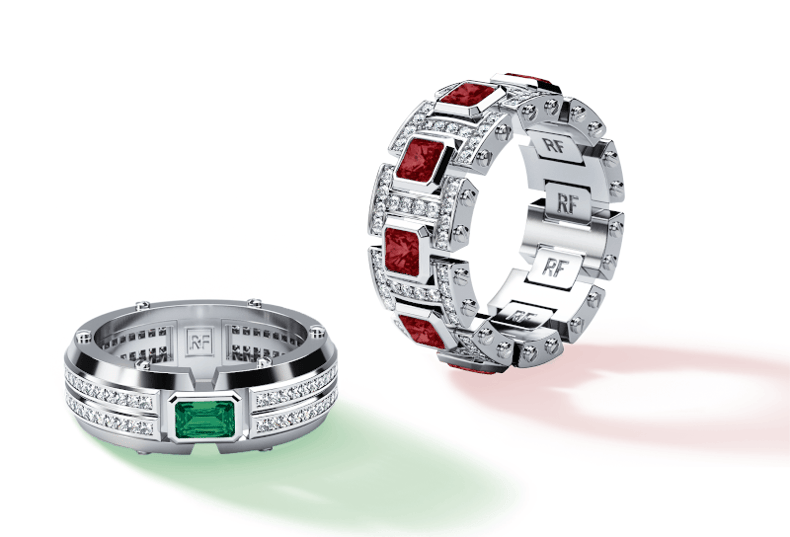 Precious stones are ones that hit the holy grail of mineral composition and have the highest degrees of beauty, hardness, durability and rarity. We’re talking diamond, ruby, sapphire and emerald.

Not just a girl’s best friend. 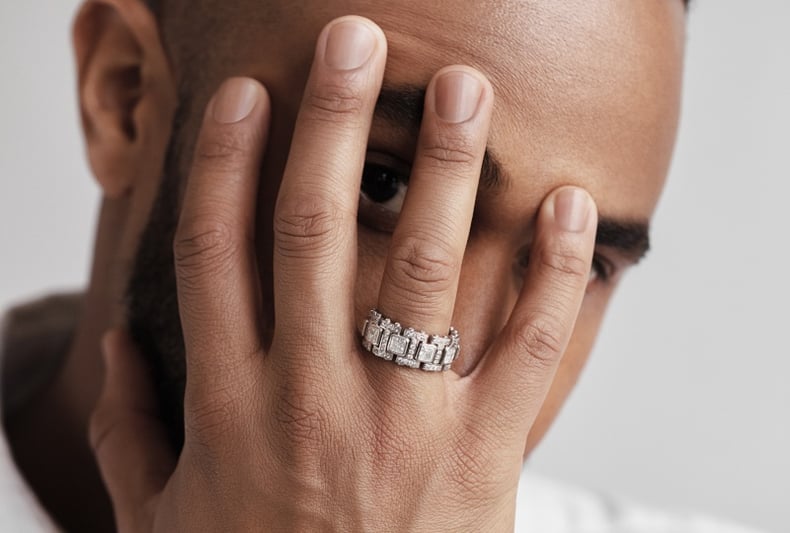 Diamonds are everyone’s friend. But actually, if it comes down to it and girls want to claim diamonds as their exclusive best friend, they’re welcome to it. Having said that the largest most impressive diamonds were owned and worn by men in the past. Although we also have a secret weapon. But let’s talk about classic - or colorless - diamonds first.

You’ve seen, you’ve heard, you know. Diamonds are the white, flashy stones that are at the top of the precious gemstone tree. Diamonds are a naturally occurring stone, so it’s only normal there will be flaws - we like to think of it as a tiny unique birthmark. These are called inclusions and more often than not, they’re invisible to the naked eye.

As it turns out, famous French maison Cartier and our neighbours at Tiffany adhere to the same standard of diamonds as Rockford Collection. All three of us select diamonds that range between IF (internally flawless: the diamonds have no inclusions visible under 10x magnification) and VS2 (Very Slightly Included: microscopic marks barely noticeable to the naked eye).

We’re proud to say our diamonds are sourced in accordance with the Kimberley Process which was established in South Africa in 2003 to prevent the trade of conflict diamonds. 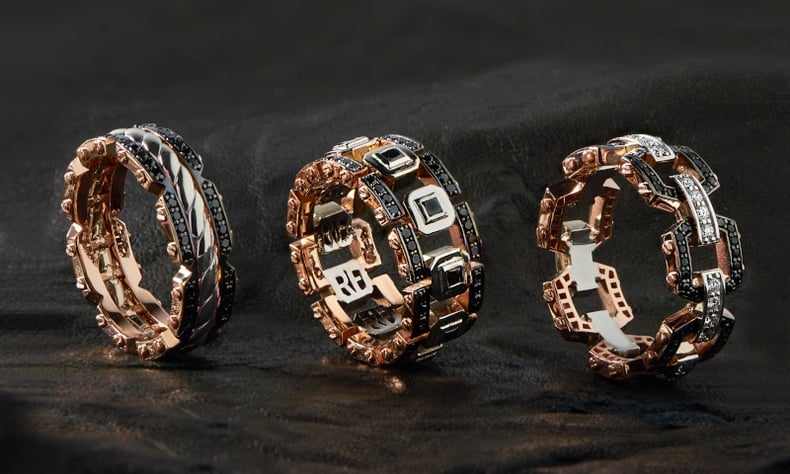 As much as women prefer white diamonds there is one more colour that very few women would pick...

See, when diamonds are formed deep in the earth’s crust, those small inclusions occur and as we noted, they’re usually close to invisible.

Black diamonds are the rock ‘n’ roll equivalent of the white diamonds. They are so loaded with inclusions that they take on a velvety black colour that glitters when it catches the light. You’ll find black diamonds throughout our range: it’s rare, masculine, and that makes it feel like it means more.

Pairing black diamonds with Everblak gold (crafted through a secret 360 hour process) is one of our favourite things to do.

Sapphires and rubies are the same thing. What? 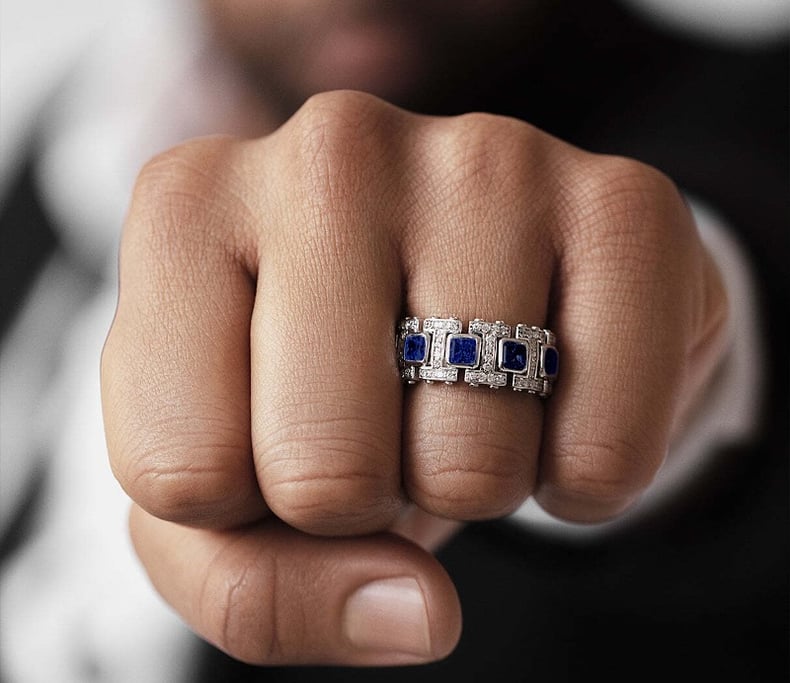 Wrap your head around this: sapphires and rubies are the same thing. Mind blown. Here’s your science lesson.

There’s a stone called corundum. Corundum contains color-causing trace elements. If the trace element is chromium, you get a rich red ruby. When the trace elements are iron and titanium, you have yourself a blue sapphire. Sapphires actually come in all colours of the rainbow, but that’s all the time we have for this science lesson.

Here at Rockford, we favor sapphires with intense, deep, royal blue coloring, which is the rarest and most valuable. We use only unheated and untreated sapphires and rubies in our jewelry. To put that in perspective, only between 0.5 - 1% of sapphires discovered are of the quality we demand. Rather we would reject 99.5% of all sapphires and rubies found.

Often our rings will be set with more than one sapphire, so we handpick them to match the colours as perfectly as possible.

The Cleburne and La Paz rings are awesome examples of how a sapphire brings a point of difference.

For more than 5,000 years, emeralds have been hankered after, from the Pharaohs of Egypt to Ancient Greece where it was rumored that Cleopatra and Aphrodite, the Greek goddess of love, were huge fans. That’s quite the vote of confidence.

Emeralds stand out in a crowd with their lush green colour. Case in point, this version of our iconic La Paz ring.

Rockford Collection emeralds are mined in Colombia. Emeralds from this mountainous region of South America are less likely to have impurities, which increases their value. Some of the most expensive and rare emeralds in the world have been sourced from Colombian mines, in particular Muzo. Cutting a stone into a perfect geometric prism is what brings out its brilliance, causing refraction that gives precious stones their irresistible sparkle. We like to take our time, spending upwards of three hours to cut our stones with precision.

To bring out the best in colourless and black diamonds, we recommend round, square and emerald (which is a rectangular shape) cuts. Sapphires and rubies are much the same: oval, round and cushion will enhance light performance and overall brilliance of these stones.

Emeralds are best suited to a step cut, which has an art-deco vibe to it and gives the illusion of the stone being bigger than it actually is.

Taking care of precious stones is really, really easy and can be done right at home if you’re not into outsourcing. Just let it soak in a mix of two-parts water, one-part dish soap for a few hours, then give it a gentle scrub with a toothbrush or jewellery cleaning brush to revive its gleam. Be a little bit more careful with your emeralds. Unlike diamonds, they don’t claim to be the toughest stone known to man and you should avoid using any soap on them.

And that’s a wrap. 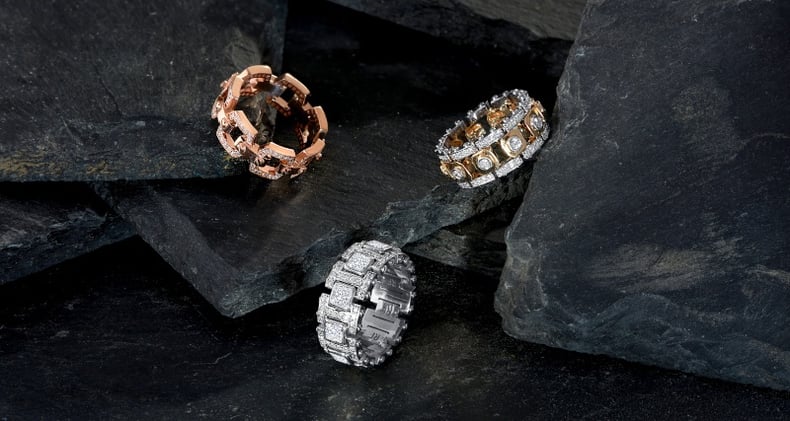 That’s our two cents. If you want to rockstar it and design your own ring with precious stones, hit us up via live chat, phone or email, or book a virtual appointment. When faced with the mind-boggling challenge of choosing a wedding band from the unbelievably boring array of men’s wedding bands out there, the proposal itself seems... 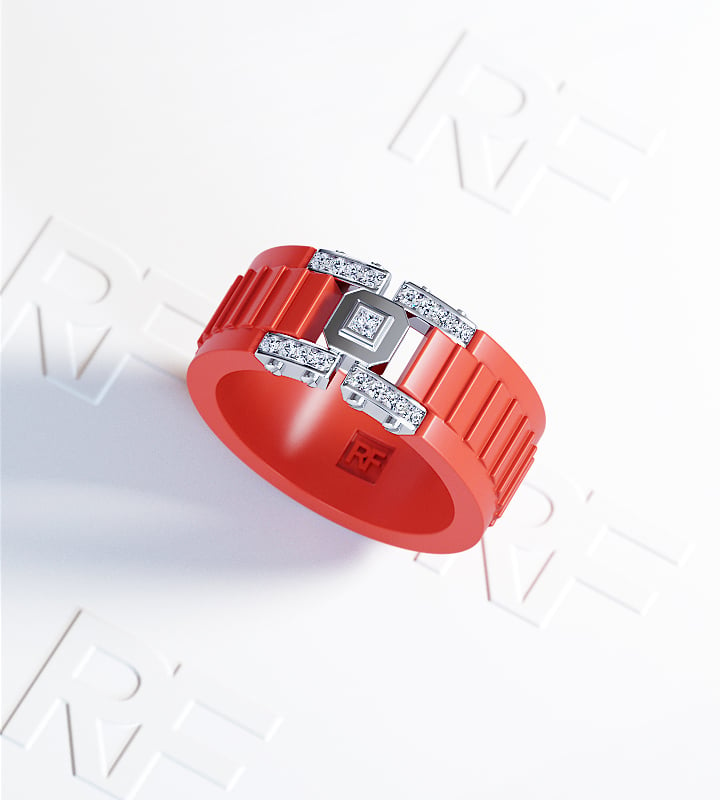 Rockford Collection has officially launched its newest range “Atomic Collection”, seamlessly blending the durability and flexibility of silicone with the grace of...